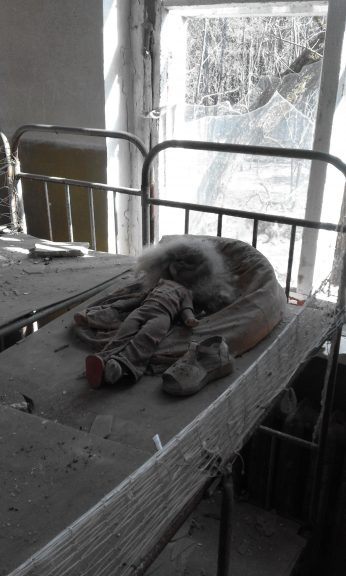 I know I’ve missed a few countries (will get back to them, I promise!) but with so many people asking about our experience, I feel I need to write my blogs on Chernobyl first. We chose to visit this area as the history has always moved me, the disaster happened the year I was born and our local community welcomed children that were evacuated from Pripyat (city close to the Nuclear disaster site) every summer. You need to visit Chernobyl as part of a tour group (who will sort out your permits and insurance) or individually but then you must pay for a private guide. We decided to go with a company called Solo East Travel tourkiev and I must say they lived up to their great reviews on TripAdvisor 100%.

We met our guide Sergei and fellow extreme tourists (Sergie said that’s what people who do such crazy things as visit sights still radioactive are called lol!) near the Independence monument in Kiev and all took a minibus to Chernobyl, around two hours away. We rented a Geiger counter for the day for $10. En route from Kiev we watched many documentaries which I found truly fascinating. What I enjoyed learning about most was how there were so many unsung heroes who volunteered for the clean up after the devastating disaster happened, they are known as liquidators. These brave souls, especially those who went in straight after the disaster risked their lives to save us, had it not been for them, the reactor would have blown again, resulting in a colossal explosion, wiping out half of Europe . I feel that they are not spoken about enough and the world needs to know about them and the amazing work they carried out under extremely hard circumstances, both physically and indeed, emotionally. This site has a wonderful video dedicated to these brave people and is definitely worth a look at Chernobyl Gallery Some of the liquidators were brought in from other places in Ukraine without even knowing where they were going! One of these men was Yuriy Bondorenko, you can read his story here Yuriy Bondorenko along with the stories of several other liquidators, both men and women. Some of the people were volunteers who knowingly risked their lives in an effort to save others, one man simply stated if not us, then who? However they got there, all of these men and women are true heroes.

Vladimir Shevchenko, a Russian filmmaker was on scene at Chernobyl in April 1986 and captured the surreal images, he died due to the radiation exposure, shortly after. You can catch his remarkable work here Chernobyl Movie 1986

We stopped off for muffins and coffee on the way and it was very interesting listening to the impact the documentaries had on us and people’s opinions of what the had learned. When we reached the 30km exclusion zone, we went through a border control, where we encountered our first radiation warning sign and met some of the people who work there in the canteen and hotel. Most of them have never been inside the 10km exclusion zone which is the area nearest the reactor and have no interest in going there!

Our first stop was at the kindergarten and as we approached, I felt like my heart was breaking. I can’t fully describe the feelings that came over me whilst I looked around but I will try. The place felt haunted, disturbing and eerie, the silence was overwhelming. I closed my eyes and imagined the past, all the joyful sounds of the kids and their teachers and my breath caught in my chest when I seen their little teddies and books (lives that just stopped on that fatal day when they were evacuated from their homes with none of their belongings and moved to places they did not know in days of pure chaos) . I felt like I was intruding on their memories so I went outside for some air, I took a look at my Geiger counter and was pleasantly relieved when it read a safe reading of 0.12, then I placed it at a tree (literally one metre away) and it went berserk, the reading increased to over 14 and so I backed away from here straight away lol!