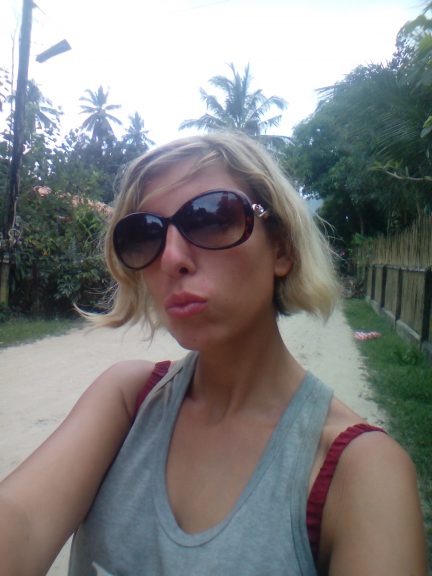 We headed straight to our accommodation on White beach road in Puerto Princessa where we met our super lovely host Jessica. Unfortunately I lost my Iphone on the plane and Jessica rang the airports and airlines for me inquiring about it, I never did get it back but this was really lovely of her to do ? We had the interesting experience of squishing ourselves into a trike and heading to town, the trikes are pretty cheap at 50 pesos for the three of us, sometimes less if the driver forgot we were tourists and charged us the local rate lol! We went out for a meal which was tasty but expensive, the Philippines is a good bit more expensive than the rest of south east Asia. We visited Jessica in her store (she’s quite the entrepreneur) and up some supplies for breakfast :~).

The next morning, we fried up Irish sausages, bacon and puddings ? Jessica brought us fresh bread rolls (still hot ?) and we shared breakfast with her. She wasn’t a fan of the black pudding but loved the bacon ? Her niece who lives with her and works in her store briefly joined us and loved the pudding ? We decided to head off to the beach, there were countless little crabs everywhere and it was interesting seeing all the circular patterns they created in the sand. We left the beach in the afternoon as the sun was scorching, a guy on a push bike passed us playing the ice cream truck music and that is indeed what he was! He had a small cooler on the back of his bike packed to the rafters with all sorts of ice creams ? My dad was really amazed by this and I’m sure everyone in Ireland will hear all about it lol! We decided to head into the town to look for a new phone and grab a bite to eat. I got a new phone with a great camera on it ( I just use my phone to take pictures as my camera is bulky, next time I go on a massive backpacking adventure, I shall buy a small compact camera or splash out on a go pro haha! We got lunch and the most delicious shakes, they were so so good, so fruity and wholesome ?
Jessica organized us a shared minivan to Port Barton for the next morning, so after more yummy Irish breakfast and fresh rolls we set off for our next adventure!

An adventure it was! The minibus driver drove like he was in in Formula one and the road was rough as hell and bendy too! We felt lucky to reach our destination alive! Dad said he should be paying us for undertaking such a journey lol!

We searched high and low for accommodation but everywhere was booked out, we came across a lovely woman who said her cousin might have room so she took me on the back of her moto to take a look whilst the guys followed on foot! We met Eden who had the best house in the village (i.e. it was made of brick!).

We then ventured off in search of lunch, found a spot, in the guide book as the cheap place lol! If you are looking for it, it’s the place with all the world flags painted on the outside, massive pasta portions and uber slow service! We sat at a long table outside (always eager to enjoy the sunshine) and chatted to other travellers from Brazil, Poland and Germany. We had some warm beers as there is no electricity during the day (generators only get switched on at night!) so no refrigeration! It’s interesting about the Filipino people, they really do seem happy just to make do. It’s a contrast to Cambodia where the people had just as little if not less but were also striving to improve (e.g. storing the drinks in coolers with ice when they had no electricity). Now I can’t remember their names but we nicknamed the German girl Julia as she resembled Julia Roberts, we seen her around a few times after and I nearly called her Julia few times too haha! They all told us of their traveling adventures so far and where they were off to next. Julia was off to south Africa to be a solo female traveler before meeting her friend there. I am always amazed, inspired an a bit worried about solo female travelers, I find them very brave and a touch Zany lol!

We went off in search of the internet cafe (the pink house), wifi in port Barton is pretty much non existent during the day due to the lack of mains electricity. We found the pink house and I can tell you it wasn’t up to much, there was a bridge into it which was rotten and the connection was like dial up!
We then ventured down to the beach which was naturally very beautiful, wide white sands and blue, clear water ? There were no loungers on the beach, this has less to do with the lack of tourists (which there definitely wasn’t a lack of!) and more to do with the Filipino’s nature to just make do.

That night we ventured out in search of dinner, we had read about the bamboo hut in the guide book so decided to go there, it was full so we went to a small local place next door. The food was tasty enough and the prices were very reasonable. We met a Spanish couple with twin toddlers who were having a right time running around outside. Their mum was telling us that she found out she was pregnant wit they were motorbiking around south America and only found she was having twins when she returned to Spain a couple of months later! They told us of their adventures and further instilled in us the desire to travel there ? We also had our first taste of fruit shakes in Palawan which are more like glasses of milk with a touch of fruit lol and are the same in every pub and restaurant in the place!

The next morning, we set off for the beach and began hiking to Long beach which is about an hours walk. We walked through a pretty jungle area and over rocks but then it began to rain! We turned back and decided to go for massages instead! There are several beach huts offering massages all for the same price so we chose one very close to the beach with two friendly ladies and it was just bliss. The oil they used smelled so beautiful, of mint and coconut and their hands were like magic, it was like you were transported to a different world as you listened to the calming ocean waves.

That afternoon, Eden went to the Fishmonger for us and purchased us a go of fish which she marinated and cooked for us with rice. It was very kind of her and very tasty. That evening we got a few bits from the local shop, it was so strange seeing all the bars on the shops in such a quiet quaint place like Port Barton (petty theft seems to be an issue everywhere in the Philippines!) This became our local go to shop as the girl grew to understand what we were asking for through her tiny window lol!

The next day, we lazed on the beach and Dad got a bit burnt as he fell asleep when Phil and I went to the cafe for a drink! Eden gave him some toothpaste for it which actually seemed to work!

We soon returned to Puerto Princessa airport on the crazy minibus, now you wouldn’t want to be in a hurry to catch a plane or anything! The bus turned back twice to pick up people that had been left behind, we were crammed in beyond capacity and could hardly wait to reach the airport!

Phil stayed at the airport with all our luggage as, surprise surprise, there was no place to store it! Dad and I ventured off to the phone book as my new phone had broken (that’s what I get for being a cheap ass and buying a local Filipino brand lol! Eventually after being to two different shops and having my phone thoroughly inspected, I got to swap it for a samsung and pay the difference, phew! ?

After all the awful shakes in Port Barton, we couldn’t resist a quick visit to the restaurant with the great shakes! They were like manna from heaven (sorry Phil!). We took a trike back to airport and set off for Manila to head to Angeles city to meet Dad’s friend.

Our next blog will tell of the craziness we found there haha!