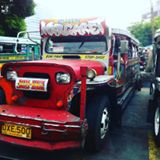 We began our trip to the Philippines in Penang airport where I spent our ringgit on a massage! This was like no other chair massage I’d had before! The intensity of it lifted me right up off the chair!

We arrived in Singapore and I have to say it is the best airport in the world, I’ll even forgive them their expensive beer. There’s a pretty garden, gaming area, a swimming pool and a cinema all free to use. There are also power sockets everywhere to charge up your gadgets for onward flights and computer desks to use (also free). It is also super clean, so clean you could eat your dinner off the floor lol!  We arrived in Manila in the evening and caught our transfer to our nearby hotel.

Just from how the airport was, the high crime level in Manila was evident (it’s higher than Delhi!). Our transfer guy was not allowed inside past the security guys so we had to go out to meet him! Further evidence came when we were short for our room by a euro (no letting you off here!) and Phil had to trek down to the nearby ATM with the company of the hotel’s security guard! It was literally two minutes away!

The next day we were woken by knocking on our door at the ungodly hour of 6am! We were informed it was breakfast time! So we went upstairs and got our breakfast, it was a stone cold egg and pre buttered sugary toast, not really worth the 6am wake up! We then went back asleep and thankfully were not woken again until our alarm went off for checkout ?

We got the transfer service back to the airport and stood outside waiting for my Dad. We weren’t allowed inside no matter how much I batted my eyelashes lol! Dad finally showed and we went about getting a taxi to our apartment. Always try to get a metered taxi and ensure the meter is running as they work out at half the price of the prepaid airport ones ? Our taxi driver was a really nice guy and my Dad chatted away to him about life in the Philippines and about their cars (men!) ? Everyone in the Philippines is super polite and it takes a bit of getting used to being called Ma’am all the time lol! The ride through Manila was an eye opening one! I was half wondering if we would make it to our apartment alive! So much poverty and starving animals mixed in with modern sky rises and super malls, the gap between rich and poor is astonishing here. My dad hadn’t been anywhere in Asia before so for him it was a real shock. I was very happy when we got to the safe zone of Makati and our apartment was in a secure building, super clean and opposite a mall ?

We did some clothes shopping in the mall and got great bargains, we also picked up some supplies to cook dinner. My dad had brought Irish food with him including steaks, bacon and puddings. Phil was overjoyed about this as he was really missing the Irish fry ? I was more happy with the Lyons tea and a chunk of the Christmas cake I had made before we left in October! It was so good, I didn’t mind at all that I was eating Christmas cake in February haha!

The next day, we caught our flight to Palawan where our adventures really began ? As soon as I seen the island from the air, I knew it would be ten hundred times better than Manila! Phew! Lol