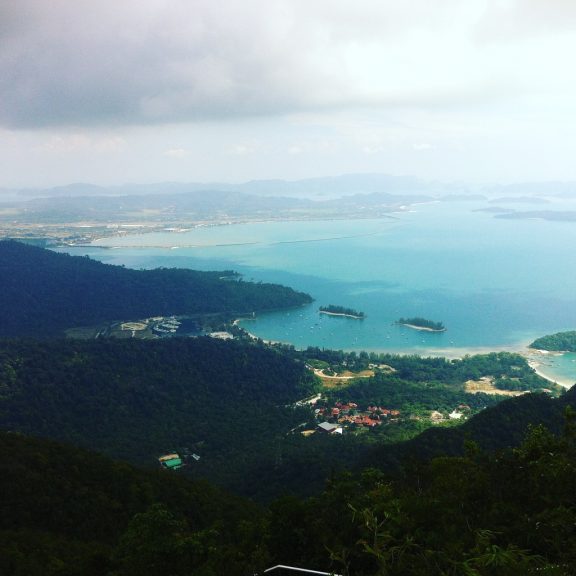 We reached Langkawi in the afternoon and caught a taxi to the backpacking area of Cenang beach, The taxis are fixed prices in Langkawi so unlike the rest of Asia you won’t have to barter hard for a half decent price or even a half decent one lol! Most journeys around the island cost 30 ringgit for up to four people ? We arrived in the only backpacking area of the island at Cenang beach and searched high and low for some accommodation, we eventually found some that had big, clean rooms with air con but not much of an atmosphere about the place. It’s the hottest place we have been on our journey so far, so do get air con when you are in Malaysia!

We took a stroll along the beach and watched the beautiful sunset, the sand was fine and white and it was very relaxing and romantic. We then got some supper from a street food guy selling humongous burgers for less than two euro (not so romantic, lol)! They were so yummy and satisfying. The next day we chilled out of the beach, the loungers are pricey enough to rent for the day so we just lay down our blanket like typical backpackers haha! We had our lunch out in a local Indian place, the naan bread was fabulous but that’s all I can say, we came to learn that many of the places serve their food only luke warm! We got lucky and found a restaurant just up from our place called queens, they only had six items on the menu, all Malay and all fresh, hot and delicious. We grew to love the Pattaya, which is a tasty rice dish full of flavour wrapped in an omelet (nom nom!). We then got a few beers and took them back to our place to enjoy them in the last of the evening sun ?.
Beer on the island is cheap as it is duty free but on the rest of Malaysia it is very expensive as it is a Muslim country. We didn’t see one Malaysian woman without a headscarf and encountered very few westerners so it was a bit of a culture shock. They are very friendly people, especially to women, they are a bit reserved around men but that’s to be expected. They are very welcoming and understanding of other cultures ? The next day, we shared a taxi with a couple of German guys to the Cable cars and sky bridge (the main attraction on the island). The guys were currently studying in Bangkok so it was interesting to hear their story. The cable car was just amazing, we seen fantastic views and enjoyed a tasty ice cream at the middle station. We came across a real clash of cultures, ladies in full Muslim dress with only their eyes showing and young Chinese girls in hot pants! The top station was great and walking along the skybridge was an experience we will never forget, the walk to it is a bit treacherous though so be warned! We moved accommodation to rainbow lodge which had a much better reception and vibe ? The next day we caught the ferry to penang.

Our next blog will tell tales of Penang