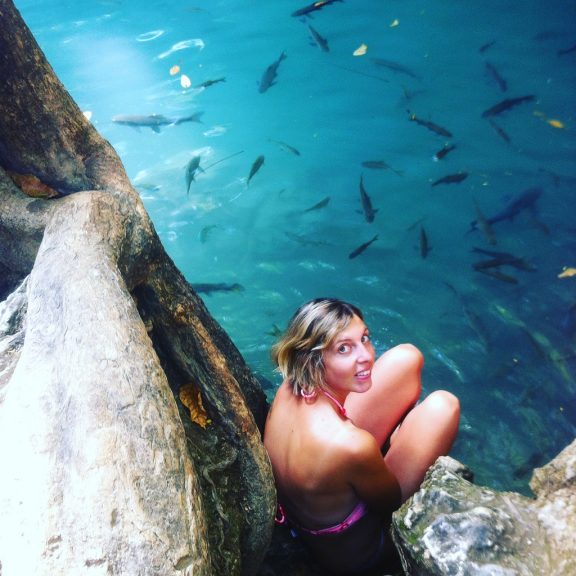 The border at Htee Kee was an interesting experience, we were stamped out of Myanmar and then we crossed the six kilometres of no man’s land to the Thai border! Our taxi man, chatted to the guards like old friends and he drove us the six kilometres for 7000 kyat extra ? We were super happy we didn’t have to walk as they were armed guards facing into the ditches posted every 100 metres for the whole six kilometres! The Thai border official guy was very pernickety wanting to know exactly where we were going and the full address of our hostel! As backpackers, we didn’t have this info as we normally just rock up a place on arrival. So, we copied a place from our guide book lol!

We then waited for the public bus to Kanchanaburi which was pretty cheap ? I was super happy to change into less conservative clothing as it was sweltering! We decided we stay a few days in kanchanaburi after hearing about it from the Australian couple and reading up on it in our guide book (we downloaded all the guidebooks onto my kindle as it’s way handier and a lot less hardship than carrying them all in your backpack ?

The bus dropped us off a bit outside the centre and we took the Songtheaw to Farang street (where all the expats and hence western food and accommodation is). We stayed in Bluestar guesthouse for only five euro a night, this was amazing value especially after Myanmar! A big highlight was all the super friendly,fluffy cats ? We ate out in a place called The Pub, ran by a guy from Nottingham and his Thai partner. It’s hard to own property as a foreigner here, you will often need backing from a local or to be married to a Thai woman! It was like heaven having piping hot western food ? We chilled for a while chatting to the owner about his life here and recommendations of things to do ?

That night, we went to the night market and gorged on lots of cheap food, Phil was chuffed with his spicy meats ? I was super happy to be back in the land of cheap fruit shakes and fresh sea food ? We slept that night in our wee wooden shack above the river. The next morning we dined at our guesthouse and took the public bus out to the seven steps waterfall in the national park. The public bus dropped us right up the entrance, handy out. The waterfall was very pretty, there were seven steps to it so it was a workout getting to the top but you could swim at some of the falls to refresh en route. There were little fishes which nibbled at your feet (like a free fish spa!). The massages in kanchanaburi are dirt cheap (150 baht for an hour!) so I can see why so many people retire here lol!

We went to the Japanese museum and the famous bridge over the river Kwai, it was incredible to stand on the bridge knowing it’s history and the film. When I told my Dad, he began to hum the film tune ? The next day we took the two hour bus to Bangkok to meet our friends who were doing a short trip to Thailand and Myanmar ? We briefly met them, took a few snaps and were on our night bus to Ko Tao. There’s an office on Khao San so it’s handy to book the trip (joint bus and boat). The bus was ok but we regretted not booking the train so we could get some decent sleep! We had to wait for a few hours at the ferry pier where I fell asleep on a bench!

Our next blog will focus on Koh Tao ?