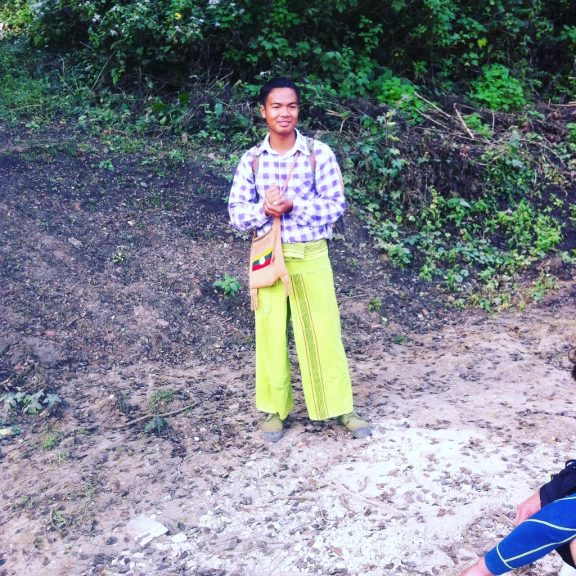 We woke up early the next morning and I was glad of my cute fluffy hat! After a quick breakfast of copious amounts of coffee,peanut rice and egg, we were off. There were five of us in our group, us, an Ozzy guy called Gavin, his French friend Julie and our local guide Jimi. He was dressed in typical Shan fashion, wearing colourful baggy trousers and a straw hat ? Our first stop was at a noodle factory to see how the noodles are made, we seen them from their hanging out in the sun in sheets to dry to their packaging. I was again surprised at just how young the factory workers were. We also passed a shop on wheels, there’s an early morning market in Hsipaw (2-4am!) and people purchase essentials here and take them to the villages by moto ? This woman was heavily laden down with goods, I’m not sure how she manages on the rough, mountainous terrain!

On our trek Jimi told us about the Shan culture and how it differed from Burmese culture and taught us a few simple phrases. In the villages, there are statues built to the Shan king and when the locals pass, they honk three times. Their are spirit houses built before the villages are built to keep evil spirits at bay. The Shan people are very spiritual and Shamans or monks are called upon to exorcise evil spirits. Their buffalo are part of the family, like horses are in Ireland. They are very respected as they work hard on the land,they are buried when they die and never eaten. We passed rural landscapes and go to see the Shan people and work and chatted with them. We met one very shy Shan lady who was making soya bean flatbreads ? We seen crops like ginger left out to dry,and hay being trashed by hand. We stopped mid way for a tea and some yummy Shan coconut biscuits ? We were greeted and high fived my many young children ? They also blurted out every phrase they knew in English to us lol! Before our arrival, they would spot us and shout the English are coming (translated by Jimi!) haha! We reached our home stay and the family were truly lovely, kind people. Julie and I assisted the Grandmother in making tea, which involved rolling the tea and then drying it. We also prepared leaves for cooking dinner later. We had a very tasty lunch of tea salad, rice and other veggie delights. We then went exploring the village. We seen all the lovely gardens and geometric designs on the hut houses and encountered a super friendly kitten. He jumped from Phil to me and was purring away ?
We then trekked some more to see the tea plantations and another village with monastery. Jimi informed us of school life in the village and all the work the monastery does. All Shan boys become novice monks for three months and can continue with their study if they choose to. The monastery have a 45 day programme to teach the Shan people English. It costs a dollar a day and includes accommodation and food! After our freezing cold bucket showers, we warmed up with green tea (which we prepared earlier!) by the fire we built outside. That night, we invited a fellow trekking group over to celebrate New Years with us ? Ewe drank beers and rice wine, told stories and sang songs. Julie taught us an African song from her time in Tanzania ? We had a chicken party also, Jimi bought us a chicken in town and prepared it for us, including the feet, head and all! Jimi told us more about his upbringing and the tattoo he was going to get. The Shan people are fond of bamboo tattoos which are done by the monks and are pretty painful. Jimi wants to get the 7 parts of the tiger done ? The next morning, I woke up early and we had rice and egg with many flavors for breakfast. Phil had caught a virus so we were happy the way back was down hill. We took a different path than the day before, and the last part involved a songthaew to Mr Shake, the perfect ending for our trek. We rested for the rest of the day and ventured out for a light dinner that night in a Chinese restaurant just down from Mr food, food wasn’t as good but the guy also wasn’t as grumpy lol!

The next day we explored more of the town, we visited Mrs Popcorn for tasty popcorn biscuits and shakes (not with popcorn,lol!). We then visited little Bagan, a small area with temples similar to the style of those in Bagan. We seen an amazing tree featuring a temple growing around it ? We also came across monks in prayer. The next day, we met up with Gavin and Julia, they introduced us to a Swiss couple who gave us the idea to head to Koh tao after Myanmar and get our scuba diving certs ? We took the bus back to Mandalay and went to Mandalay hill. Mandalay was exceptionally busy as the were celebrating Independence day. The kids were off school, so they all visited the zoo and the teenagers are dressed up in masks and drove crazily up and down the streets! The views from the top of Mandalay hill were impressive and were the love gardens en route! The next day we caught the bus south to Mawlymine, to venture on the road less traveled.