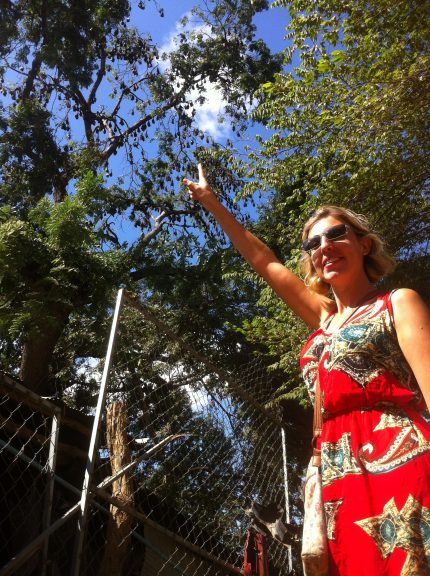 We arrived at the bus station just outside Battambang to be bombarded by tuk tuk drivers yet again, we were drawn to one guy with a kind face and a sign advertising fifty cents anywhere in town. To go with him was one of the best decisions we have made on this trip, his name was YaYa and was the funniest, most genuine guy ? He took us to a cheap hotel and gave us lots of info on what we could get up to in Battambang. We decided we would go to the bat caves,killing caves and the mountain later that day. We got breakfast and explored the town, seen the market and got a good feeling about the place. It was the same feeling I had in Banlung, almost like you had come home ?

YaYa picked us up at three and we ventured off out of town to see the sights, YaYa acted as out very informative tour guide, you can tell he loves to chat to people and teach about his history and culture and learn a bit about yours. Our first stop was at a beautiful Pagoda, YaYa informed us that it had been used as a prison during Khmer Rouge rule. His father lived there and worked in the rice fields as a slave to the Khmer Rouge ? It was tiny to say it had housed thousands, they would have had no room to sit, let alone lie down to sleep. We then moved on to the killing caves and the history here is too distressing for me to blog about. We then took a jeep (driven by Mr Jeep, a crazy loon of a driver!) to the top of the mountain, the views were breathtaking as was the hindu temple. After taking photos of the sunset, we took the jeep back to the bat cave. Millions of bats came out of the cave, they all flew together like one big bird! YaYa told us they go to Tonle Sap lake to feed on the mosquitoes (I love any animal that means less of these nasties in the world! lol!). We followed their path and got great shots of them flying over the mountain.

The next morning, YaYa picked us up and brought us to the bamboo train. On route, we stopped at a roundabout with a giant statue of a guy holding a stick. People were worshiping him and leaving bananas and coconuts for him! YaYa proceeded to tell us the story of this guy, known now as Grandfather Stick, hero to the people of Battambang (which was then called a different name!) He defended Cambodia with his stick,which he lost in Battambang. When he lost his stick, he lost his power and now Battamabang stands for lost stick province. People leave him offerings to ensure a safe trip to the capital Phnom Penh ? The bamboo train was an interesting experience, its basically a train in which the carriages are completely open (just a floor) and made of bamboo (kind of like a pallet on wheels). When you meet another carriage you simply stop yours and life it off the tracks, allowing them to pass! The experience was let down by having rip off shops at the end of the ride with kids guilt tripping you into buying the stuff. YaYa made up for this though with his detailed account of how the bamboo train came to be ? The Khmer Rouge stopped all the trains and put land mines on the roads to stop the Cambodian people travelling. So after they fell, one clever guy made the bamboo train. ? There were no engines so one guy pushed it along with a stick (like punting), this enabled them to travel to markets etc.
YaYa then brought us to a suspension bridge to see fruit bats. This bridge is known as the golden gate bridge of Cambodia and YaYa just about fit on it with his tuk tuk! We then seen many fruit bats hanging so still from a tree, these just feed on bananas and YaYa told us of how some rich Cambodian men will buy their blood for a 100 dollars to use as Viagra lol! We then went to the Bayan temple which is even older than Angkor Wat! There was a couple in very colourful attire getting their wedding photos taken and so I asked YaYa how wedding are in Cambodia. He told us that a man must give the girls family money if he wishes to marry her and that her father will ask around his village what kind of guy he is and about his family! (how very Irish of them!). You cannot get pregnant out of wedlock or you will be fined and imprisoned for up to ten years! YaYa said that is where the saying no money, no honey comes from lol! I asked him what happens if you don’t have a lot of money, YaYa said, you get a second hand wife (divorced) at a discount lol! We left YaYa and gave him a handsome tip of which he was super grateful for. We were happy to run into him randomly at a cheap cafe later on ? If you ever go to Battambang, even if you don’t normally get tuks tuks, do get YaYa ? He is a really great guy and will make your trip way better

Next we move to Otres on the coast, follow us on our crazy bus ride there!